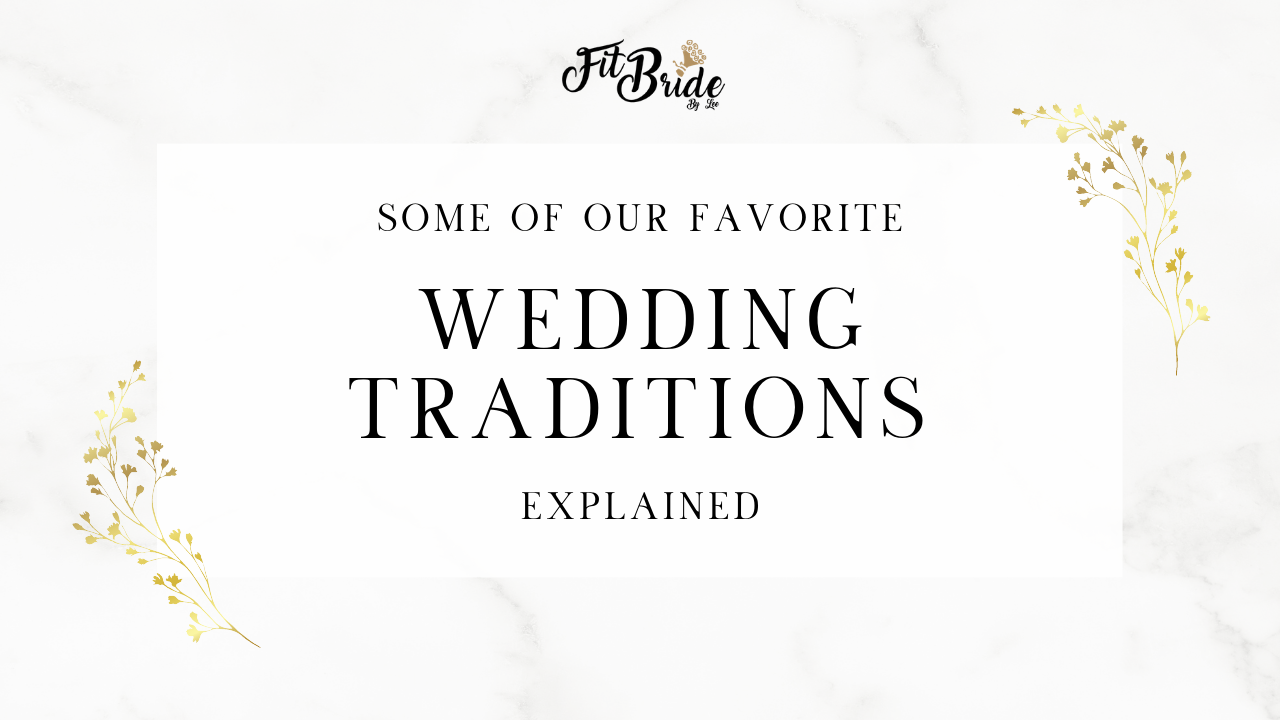 Have you ever been curious about where wedding traditions come from?

In honor of FitBride By Lee's official 2021 launch, we thought it would be fun to do a little digging and learn about some interesting wedding traditions around the world and from the past! Here are some of our favorites:

Keeping The Evil Away
In Norwegian culture, the bride wears a crown with small charms; the tinkling sound is believed to keep evil spirits away.

In Middle Eastern tradition, the bride covers her hands and feet in henna to protect themselves from the Evil Eye.

The bride is carried over the threshold to protect her from evil spirits below.

The concept of the veil comes from ancient Greeks and Romans believing hiding the bride's face would protect them from evil spirits.

In Denmark, brides and grooms often cross-dress to confuse spirits.

In Ireland, it is believed the bride must have 1 foot on the ground at all times (even while dancing), or else an evil fairy will come and sweep her away.


Groomsmen & Bridesmaids
The original intent of the "Best Man" was to make sure the bride didn't escape during the ceremony. It was likely that at the time, the best man was the best swordsman.

Bridesmaids and groomsmen originally dressed similarly to the bride and groom to confuse exes and evil spirits.

In ancient Roman times, there was a law that required at least 10 people to be present to witness the wedding; five bridesmaids and five groomsmen.

Bridesmaids often showered the bride in gifts in case the bride's father didn't like the groom and wouldn't deliver a dowry - the gifts from the bridesmaids would become the dowry.

From about 410 to 1066, bridesmaids would try and catch the bride's shoes to see who would marry next - not the much safer bouquet option.

In Peruvian weddings, the women in attendance would pull ribbons out of the cake - whoever pulled the ribbon attached to a fake ring would be the next to marry.


For Luck
In Fiji, a common tradition is that the groom asks the bride's father for her hand in marriage - and offers a whale's tooth.

According to English Folklore, Wednesday is the best day to get married - Monday is for wealth, Tuesday for health... and Saturday is the most unlucky!

The idea that it is bad luck for the bride and groom to see each other the day of the wedding stems from arranged marriages - it was believed if they had enough time to see each other, they might call it off!

The last line of this rhyme is "And a sixpence in her shoe" - it represents lasting wealth for the couple.